Archives of Intimacy: Julio Salgado’s “Illegals in Times of Crisis” 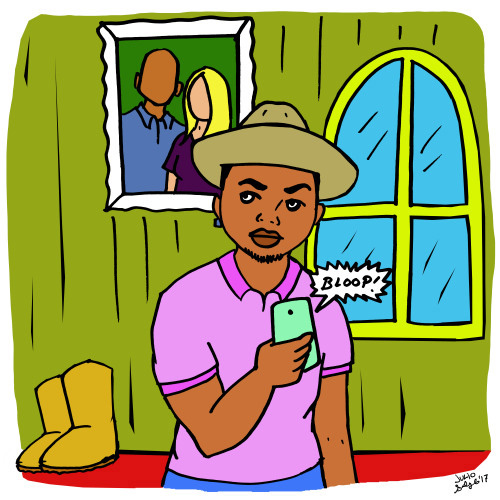 How do state-designated notions of personhood affect the understanding of the intimacy of our lives and others? Queer Artivists (a neologism for Art Activists) like Julio Salgado have been foundational for deconstructing the hegemonic narratives that are often put forward by neoliberal and conservative media. The criminalization of migration from the global south emerged alongside prevalent visual narratives and policies that depicted undocumented people of the global south as “illegal” (Perez 25). To combat the visually-graphic way undocumented people have been depicted as fugitive and illegal, Julio Salgado’s work presents an alternative graphic focusing on the everyday experiences of undocumented people of color, and how their unique experiences emerge because of their race, gendered, and legalized conditions. His choice to center his experience and the experience of other queer, Black and Brown, undocumented folk highlights the intimacy of everyday life and still considers the way structures of power are always at work in the background—delineating the potentiality of terror that the nation-state enacts through its deportation regime, yet deconstructing the one-dimensional (simply abject, simply criminal) narratives that are provided for marginalized undocumented people by the masses. Salgado’s work has been featured widely online and in museums (including an exhibit at the Smithsonian—an institution with a very colonial past).

My essay “Archives of Intimacy: Julio Salgado’s ‘Illegals in Times of Crisis’” specifically examines the ways in which Salgado depicts quotidian sex acts within his series of digital drawings titled “Illegals in Times of Crisis”––as well as the vignettes that accompany them. Within his artwork and the vignettes that accompany them (which are mostly written by him, with some that are written by guest writers like Yosimar Reyes), Salgado conveys how un/documented people negotiate politics on a daily basis—sometimes through hook up stories, or simply through a recounting of a bike ride. For example, alongside the vignette “Ugg Boots and White Literature” written by Yosimar Reyes, Salgado provides visual media that represents Yosimar with a portrait of the married man he hooked up with and his wife. I emphasize this work because Salgado’s work primarily focuses on the experiences of undocumented folk, but by centering the experiences of undocumented folk he does not reinscribe the illegibility that many queers of color face legally or socially. The analysis I put forward in this project, and the archiving of intimacy that Salgado undertakes is meant to deter people from thinking about this issue through a politics of recognition because a politics of recognition is a matter of including a person into the traditional fabric of the U.S., rather than looking at foundational issues and abolishing the structures that give way to their re/constitution. Ultimately, challenging politics of recognition is an impulse of abolition because we must fundamentally reimagine the society we live in to ”belong-in-difference.” Intimate acts allow us to challenge the politics of recognition, yet these are only small steps that allow us to investigate our own processes of understanding.