An Object of Colonial Power in the British Museum 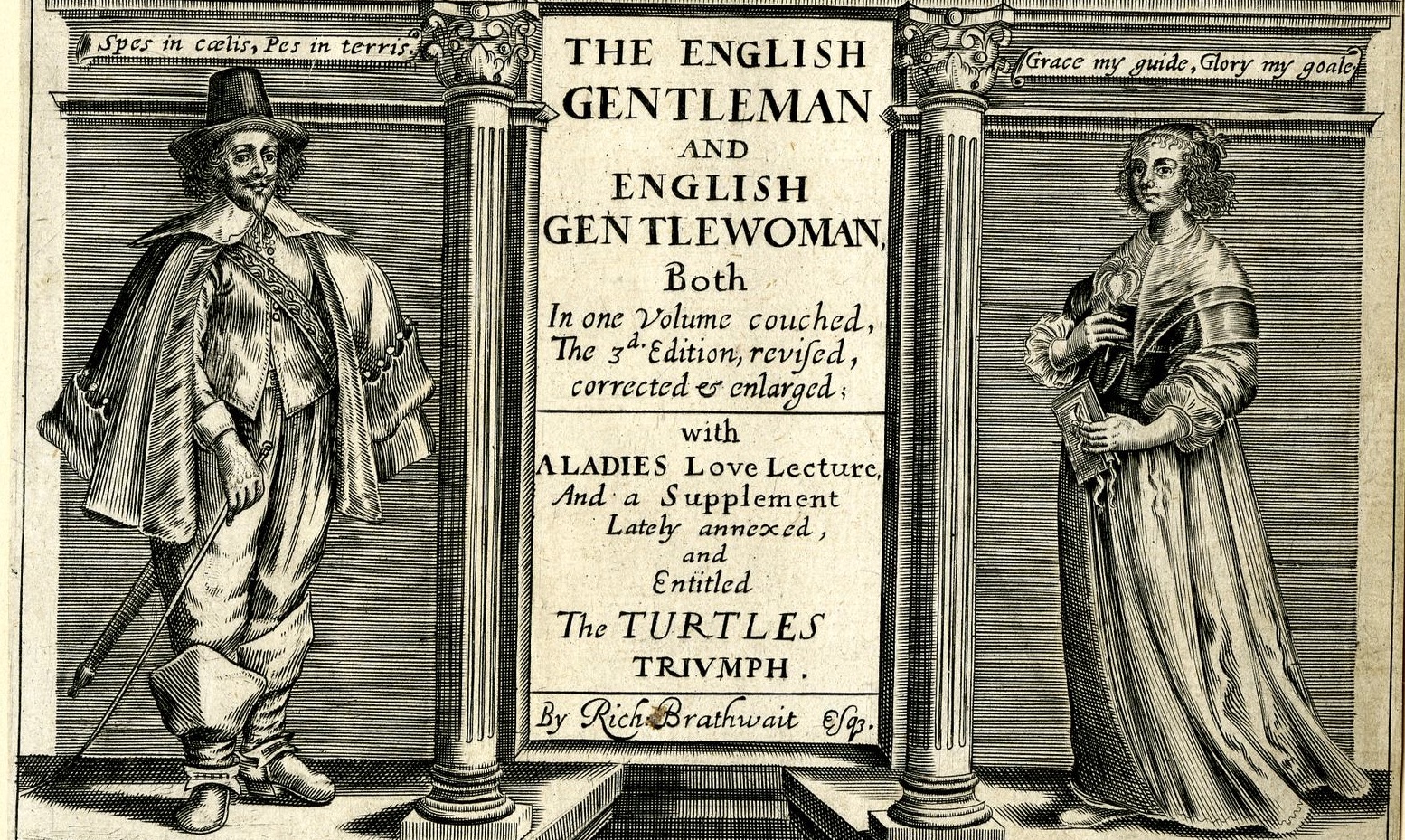 The British Museum’s collection houses a curious printed object serving as the title page for the third edition of Richard Brathwaite’s text The English Gentleman and English Gentlewoman, printed in 1641. Brathwaite, an early modern poet and writer, wrote his text on the virtues a contemporary English “gentleman” or “gentlewoman” should possess and cultivate. The visual program of the title page print is articulated through architectural features, which create small scenes titled with different virtues according to the heteropatriarchal associations of gender in the early modern period. A section of the print titled “youth” features an amphora, “disposition” includes a book, “education” contains a globe, and “apparell” is filled with jewelry. At first glance, the print illustrates a gendering of objects in tandem with the centrality of material culture to aristocratic, genteel society. Two large figures, a man and a woman, occupy the middle register of the print. The scenes directly above and below them, filled with objects, represent the gendered virtues that this print and text foreground for the early modern viewer or reader. Above the female figure is the scene “apparell,” featuring gowns and “decency” containing a portrait and fan. In contrast, above the male figure is “vocation” including a ship and blacksmiths tools and “education” displaying musical instruments and keys. Objects articulate these virtues to the viewer, much like the emerging collecting practice in cabinets of curiosities, in which a collector’s objects speak to their wealth, education, and virtuosity.

Further examination reveals that the print also contains several gestures toward maritime travel (a ship and a globe), illuminating the interconnectedness of this aristocratic society and its material objects to England’s emergence as a colonial power. Reading this object through Professor Kim Hall’s crucial work in her book Things of Darkness: Economies of Race and Gender in Early Modern England, one can recognize this triangulation of aristocratic values, material culture, and colonial power as an articulation of an English identity deeply interwoven with early formations of white supremacy. As Kim Hall explains, early modern English subjects became aware of themselves by comparing and contrasting themselves against the people they began to colonize, which was instrumental to their assertions of supremacy. This print visually articulates, in conjunction with Brathwaite’s text itself, the importance of these virtues to the formation of “well bred” society. It demonstrates the overt overlap between heteropatriarchal gender binaries and racial formations as a result of colonial travel and the objects that represent such travel.

Taking this argument one step further, one might consider this object’s role in history of collection at the British Museum, which also reveals practices of white colonial dominance. Donated in 1896 by Sir Augustus Wollaston Franks, the former assistant in the Department of Antiquities at the British Library, the print was just one object in a donation that included 70,000 items. Franks was a trustee of the Christy Collection and associated Christy Fund, which from the late 1860s was responsible for the British Museum’s “ethnographic and archeological collections,” a fact that both explains and complicates Franks’ ability to amass a personal collection of over 70,000 precious objects. The collection ranges from Greek amphora, Chinese paintings and prints, fourteenth-century rings, amulets, animal remains from Tahiti, the Americas, and France, as wells as art objects taken from the Chatham Islands, the Americas, Peru, New Zealand, Samoa, Tahiti, and many other places. Resolutely, the Brathwaite print and its early depiction of refined English subjects and their cabinets of curiosity are reiterated in the colonizing collecting practices of its donor.